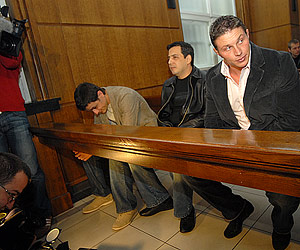 Four defendants are tried by Sofia City Court for the murder of Milcho Bonev. Photo by Kameliya Atanasova (Sofia Photo Agency)
The widow of one of the founders of Bulgaria's obsolete ex-grouping SIC, who was shot dead two years ago, took the witness stand Wednesday as court renewed the trial.

Bulgarian mobster Milcho Bonev's widow Silvia Panagonova, testified as a witness in trial over the murder of her husband.

In court, Silvia Panagonova said she was not aware of problems in her husband's business and cannot explain the reasons for his murder.

Panagonova, who co-habitated with Milcho Bonev dubbed Baj Mile, claimed she did not know either his business or his friends. She also said she did not know well the prominent underworld figure Mladen Mihalev, dubbed Madzho, althought he was claimed one of Baj Mile's best friends.

"I met Madzho a few months before my husband's murder. I have my own social circle and didn't know well all his friends," added the widow.

The elder of the two mobster brothers, dubbed the Marguin, failed to take the witness stand in the murder trial.

The lawyer of Krasimir Marinov, aka the elder Marguin, presented papers for the sick leave of his client, who is currently under home confinement. Marinov is the last member of the obsolete ex-grouping SIC alive.

Baj Mile, founder of SIC, was killed in 2004. He was believed to be an important link in the drug trafficking and distributing network on the Balkans. In September 2001 Milcho Bonev survived a bomb attack as he entered the block of apartments he occupied in the Iztok district. The explosion left two of his bodyguards heavily wounded.

Four defendants are tried by Sofia City Court for the murder of Milcho Bonev, his four bodyguards and a pimp from the town of Pazardzhik.

Important documents, bank accounts, safes and valuables have disappeared from the site of the murder, Silvia Panagonova told the judges.

Milcho Bonev is believed to be one of SIC founders together with other prominent figures from the underworld - Krassimir Marinov a.k.a. the Marguin, Dmitrii Minev a.k.a. Dimata Rusnaka, Mladen Mihalev - Madzho, Ventsislav Stefanov.

Crime boss Kostadin Dimitrov, a.k.a. Samokovetsa, who was shot dead in Amsterdam last December, also features on the list of Bonev partners.

He owned hotels in the Borovets resort and is one of the heads of football club Slavia.