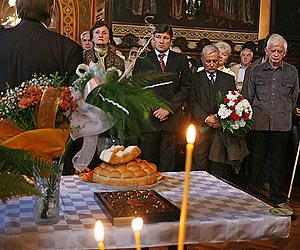 The priests in the Sveti Sedmochislenici Church in Sofia held a dirge on the occasion.

"The day is sad but at the same time happy because the Bulgaria democracy has canonized its saint Nikola Petkov," Tzvetanka Andreeva from the Sofia organization of the agrarian BZNS party said after the service.

The leader of BZNS Anastasia Mozer, local and municipal heads of the agrarian organizations attended the dirge.

In 1933 Petkov, as president of the Bulgarian chapter of the League of Human Rights, had organized a campaign to protest Dimitrov's trial by the Nazis. And it was Petkov whom Dimitrov publicly thanked for this support after his acquittal.

In his seminal work The Balkans 1804 - 1999, historian Misha Glenny quotes Dimitrov's own words in later explaining why he ordered Petkov's execution: Petkov had to die - for the crime of fearlessly leading a political movement which alone threatened communist domination of Bulgaria - because voices both within and outside Bulgaria had presumed to press for some mercy to be shown this honest and devoutly Christian Bulgarian patriot. Thus spake Dimitrov: "But when I came to the question of blackmailing the Bulgarian nation and infringing on the right of our sovereign people's court, the death sentence had to be executed."