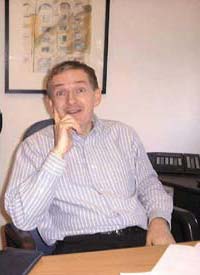 Q: How does your work in Bulgaria differ from British Council activities in other countries?

A: The work of any British Council office is very much designed for the country concerned in the light of a number of factors, including demand for what we do, interest in what we do, relations between the countries and what the foreign policy objectives are. In Bulgaria we have a very well balanced office, which includes almost every aspect of what the British Council worldwide does - a lot of arts work, English language teaching, examinations, governance and society work, we run libraries and audio-visual centers. We also manage projects for the World Bank, the European Union, the British government.

Q: Which aspects of your work here would you like to see further developed?

A: We are looking at doing more science work, probably science information work. It is not our job to fund a scientific research, but rather to build relationships between our two countries. We will continue our arts work, which is increasingly collaborative and immediately creative work.

Getting people to work together is something very valuable and very exciting to watch. During the "Let's Play Orchestra" week cellist Robert Cohen and violinist Mincho Minchev worked with young string orchestra musicians, putting together an orchestra of teenagers who never played together before. What they did was actually in itself creative. A few weeks ago we ran a creative writing workshop. Among the invited were teenagers from a children's home. I had a letter from the children in the children's home, saying that the process released unknown things from their individual souls. Working in this various areas is tremendously valuable because it creates, it engages people and they feel personally drawn into it.

We are also continuing with our office information work and developing our work on European Union accession. We are not involved in the politics, but we are working with lots of people form NGOs and agencies to help in certain areas, where we think the United Kingdom has something to offer. Getting in line with EU professional standards and objectives is actually quite important thinking about mobility of labour over the whole Europe. If Bulgarians send CVs saying they are members of an Association, which part of a European professional association, this means that there are certain standards that are recognized throughout Europe, to which this Bulgarian management consultants have both agreed to and tested against and allowed to register.

We are looking at areas of social issues - migration, refugees, minority groups. People say to us that we can do something that the other agencies are not doing. There is no point in our trying to do things for which other people have much more money and much better expertise. Still there are gaps and they might be quite interesting in terms of building up links with the United Kingdom.

Q: How do you assess Bulgarians' interest in the activities of the British Council?

A: It is always a simplification to talk about people at that level of generality. Obviously our work does not extend to everybody in the country, we are too small for that. But I am astonished by the number of people who do know about us and appreciate it. We try as much as possible to get publicity for what we are doing, which is important because we are in the business of building international relations. That's why we try to get a lot of our arts work in particular televised and on radio. So I think there is a very high level of interest, there is much evidence about that and the press coverage is absolutely enormous. But we are always looking to make improvements.

Q: Don't you think people from Eastern Europe are much more inclined to switch to and adopt foreign values and cultures than Westerners and Americans?

A: Yes, I agree with you and I think there are a number of reasons for that. American and Western European culture are dominant cultures worldwide. These are big cultural movements. People form Eastern Europe see in the films and glossy magazines the kind of lifestyle that seem to be attractive, forgetting that this is fiction and not fact. In recent history Europe has been divided politically. The problem is that people see Western Europe and USA as culturally dominant, economically prosperous. People seem to think that if they adopt these values they will become that powerful and prosperous. I don't' think it works like that.

It is certainly not part of my job, my instructions and my personal wishes to seek to impose certain cultural values. What we want to do is break down barriers and show people from different cultures what is good in each other's cultures, so that they can benefit from making those connections. In the same way we encourage Bulgarians to go to Britain and show the best of what they can do. This also encourages a degree of self-confidence. People must stick to their own values, but sometimes the values of a culture clash with contemporary values on human rights.

Q: What is your opinion on one of the most widely discussed topics recently, globalization?

A: It clutches you all the time. It is a very complicated question and I never thought about it in terms of a simple answer to a simple question. It is pretty sad to see a monolithic culture coming over. On the economic side some companies do have enormous power and I think all of that is of some legitimate concern. At the same time it is marvellous that people can communicate to each other, both physically and virtually.

Globalization also makes you feel more safe and secure, gives you predictability. The sharing of certain values is also a form of globalization. I would like to stress that it is not our job to contribute to that. It is a part of our organizational culture to respect the cultures of the countries we are working in.

Q: Which event do you personally consider the most memorable since you've been Director of British Council Bulgaria?

A: Moving to the new marvelous building. At a less visual level there is much more collaborative work, which I personally find enormously satisfying. There are also many things I am not so happy about. We used to have teachers in Bulgarian schools, we no longer have them because of policy reasons. A lot of people in the country felt very disappointed. I share some of the regrets that we no longer have this social and cultural contact.

Q: Education, business and culture projects are all priorities for the British Council and they promote each other. Do you think they can peacefully co-exist in today's business-like world?

A: There are big problems in the arts and education, because of the competition from businesses. Education is always difficult and people are less interested in it because they prefer other economic opportunities. The job of the governments is to force certain things to the front, while market forces are pushing them in some other direction. In the arts the danger somes when you leave things too much to market forces, because it is cheap and has wide popular appeal in the short run. The result is a fairly low quality and lack of creativity. Though much of it will die, artistic achievement must be encouraged.