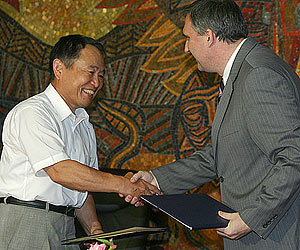 Japanese Ambassador to Bulgaria Koichiro Fukui (L) and Bulgaria's Foreign Minister Kalfin (R ) exchanged notes on Tuesday for the donation. Photo by Kameliya Atanasova (Sofia Photo Agency)
Japan's government has granted USD 2,860,000 to Bulgaria for the founding and building of a museum of the Thracian art in the eastern Rodopi Mountains.

The Japanese Ambassador to Bulgaria Koichiro Fukui and Bulgaria's Foreign Minister Ivaylo Kalfin exchanged notes on Tuesday for the donation.

The Thracian art Museum is a joint project of the Bulgarian Ministry of Culture, the Haskovo Municipality and Japan. The idea is to build a whole museum complex around the Thracian tomb near the village of Alexandrovo.