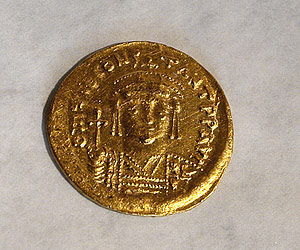 Photo by Yuliana Nikolova (Sofia Photo Agency)
Bulgaria's National Museum of History exhibited for the first time on Tuesday artefacts unearthed near the Bulgarian towns of Peshtera and Ivalylovgrad.

The first group includes 14 gold coins from the time of the Roman emperors Justinian I and Justin I. The coins, which were unearthed in the St. Petka Stronghold near Pesthera, bear record of the last days of the stronghold, which was taken in the 6th century AD by the Bulgarians, the Slavs and the Avars.

The coins were probably sent from Constantinople to the fortress to pay the soldiers' wages, head of the National Museum Bozhidar Dimitrov believes.

The other group of artefact in the exhibition consists of five bronze and five glass bracelets only, found in the tombs of two women in the Rodestitsa area near Ivaylovgrad.