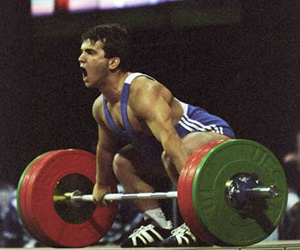 Naim Suleymanoglu, pictured here as setting a world record at the 1996 Summer Olympics in Atlanta, will run for Turkey's member of parliament. Photo by www.britannica.com
World-renowned weightlifter Naim Suleymanoglu, who dominated the sport in the mid-1980s and '90s, will run in Turkey's general elections on the ticket of a far-right party.

The Bulgaria-born sportsman migrated to Turkey during the so-called "regeneration process" at the end of the 80s, when ethnic Turks were forced to adopt Bulgarian names, prompting their mass exodus from the country.

This is the second time that Naim Suleymanoglu enters Turkey's general election race after failing to make it to parliament in the previous vote.

Analysts say that just as before Suleymanoglu, better known in Bulgaria with his original name Naim Suleimanov, will count on the support of Bulgaria-born voters, living in Turkey, to score a victory.

Turks will head for the polls to elect the country's next parliament on July 22.