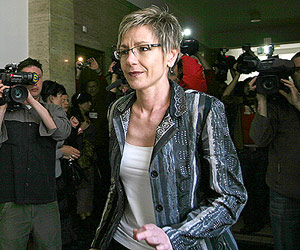 The two are accused of helping Krassimir Georgiev head of the Frontier company with information concerning the case of Sofia's bankrupt Toplofikatsia heating utility.

Ninova has been charged with instigating and aiding the crime, while Sharlandzhieva, according to the prosecution, actually committed the crime.

Giving Georgiev information he shouldn't have had access to, the two have helped him earn personal gains, prosecutors believe. The pre-trial procedures were launched around midday on Tuesday, and witnesses and the defence will be subpoenaed on Wednesday. Sofia Chief Prosecutor Nikolay Kokinov announced that they should also start interrogating witnesses on Wednesday.

There is still no information whether Georgiev will be among the people subpoenaed for the trial.

Ninova, a former investigator herself, and two of her former colleagues, Tanya Sharlandzhieva and Zoya Ivanova, faced the prosecutors on Monday.

Sharlandzhieva, one of the investigators on the case, has been accused by Alexandrov of leaking information about the probe against the former executive of the firm, Valentin Dimitrov, charged with money laundering and embezzlement.