Bulgarians Not Quite EU Citizens in Rome 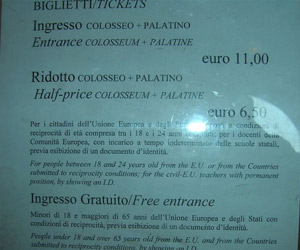 Photo by the author.
Dear Editor,

I am writing following a recent trip to Rome with a Bulgarian co-traveller. I was disgusted by an incident at the Roman Coliseum, which I felt compelled to write to you about. It may seem insignificant to some but to both myself and my travel companion it was both an upsetting and degrading experience. I also thought it may be a useful word of warning to other young Bulgarian travellers to Rome.

I have attached a photograph taken at the Roman Coliseum on March 17th this year. Around the whole monument there are signs informing you that 50% discount is available to EU citizens aged 18 to 24 on production of an ID. As it happens my Bulgarian co-traveller was 24 years old and according to the signs qualified for the discount. Upon reaching the cashier desk after a lengthy queue we produced my fellow traveller's Bulgarian identity card and requested the discount.

Much to our dismay the cashier kindly informed us that Bulgaria was not in the EU and we didn't qualify for a discount. We all told her that Bulgaria was in the EU, to which she answered it wasn't. This wasn't getting anywhere, so we asked to speak to her manager. A couple of minutes later, an Italian man appeared stating that it didn't matter that Bulgaria was in the EU, we still didn't qualify for a discount as Italian parliament had not made the official constitutional changes to allow young Bulgarians to benefit from this discount. With the pressure from the crowd queuing behind us and growing embarrassment as if we had done something wrong, we gave in and paid the full fee tickets. As we were walking around the Coliseum I could not help but feel a sense of bitterness and annoyance with what had happened. It wasn't about the discount. It was about being reminded that you are not quite an EU citizen yet.

Undeterred I decided to visit the Visitors Centre in the Coliseum and find out what was going on. Why were they advertising discount for EU citizens, yet, turning back young Bulgarians? We explained what had happened to the staff at the Visitors Centre who agreed that we should have had the discount. Yet after a couple of phone calls including one to the cashier who sold us the tickets, we were once again given the same story and that we couldn't have the discount. I told the staff that all their posters and signs were therefore wrong and a lie and they should get rid of them. Something which I doubt they've bothered to do. One of the staff kindly told us that yes, Bulgaria was in the EU but Bulgarians did not have the same rights as EU citizens. We didn't know what to be more offended about at this stage - my fellow traveller not being a full EU citizen, not being given discount or being lied to by the posters. We left the Visitors Centre with an even bigger sense of hurt by what had happened.

On the way out I looked into the gladiators' arena and thought how ironic being treated as a second-class citizen in a place where unfortunate non-citizens were devoured for the pleasure of Rome's elite.