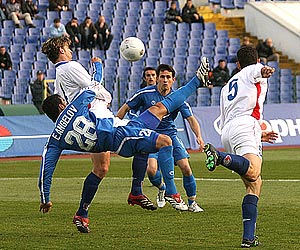 Levski's Emil Angelov scores one of his two goals in the 8-0 thrashing of Marek. Photo by Yuliana Nikolova (Sofia Photo Agency)
Bulgaria's two most successful football clubs, Levski and CSKA, warmed up for their "eternal derby" next week by soundly defeating relegation strugglers Marek and Rilski Sportist, respectively.

CSKA cruised to victory against Rilski Sportist, winning 3-0 through goals by Florentin Petre, Evgeni Yordanov and Ododji, missing another score of chances.

"We won categorically, without too much effort, which is satisfying. The most important thing is that we got three points," CSKA manager Stoycho Mladenov said in his post-match comments.

"We have one week before the game with Levski to prepare the players physically and psychologically, but the less we talk about that game, the better," he added.

Levski proved to be less wasteful in their game against Marek, winning it easily 8-0 to make up to their fans for last week's 2-1 loss to Rilski Sportist.

Levski's goals came from Emil Angelov and Nickolay Dimitrov, who both scored braces, as well as Dimitar Telkiyski, Zhivko Milanov, Cedric Bardon and Jayeoba, who scored in his first game after an injury layoff.

Lokomotiv Sofia stayed in the championship race, after winning 2-0 at home against Cherno More.

Levski remain top of the table, with 51 points from 20 games. CSKA and Lokomotiv Sofia are neck-in-neck for second, with 48 points, CSKA edging it on goal difference.