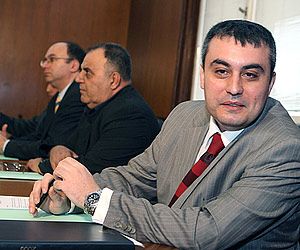 Bulgarian prosecutors and foreign police officials discussed Wednesday the antiquities' traffic fighting. Photo by Yuliana Nikolova (Sofia Photo Agency)
Bulgaria is to look for its precious antiquities, which were illegally exported to countries all over the world, prosecutors announced at a meeting with UK, US, Italian, German and Dutch police officials on Wednesday.

Nine out of fourteen Bulgarian silver plates, found recently, are in Greek museums, one was put up to an auction in UK as the authorities did not manage to prove it belonged to Bulgaria's national heritage. There is no information about the location of the other four.

The prosecutor's office said this data has been given by the treasure-hunter, who found the valuable objects.

Prosecutor Nikolay Solarov said Bulgaria has serious problems with its antiquities' protection, as a new law on it has not been prepared yet.

"Cases for historical values' stealing will soon be heard by the court and the old ones are to be re-opened," prosecutor Solarov added.

At the beginning of his mandate, the Chief Prosecutor Boris Velchev said he would start a check-up of the private collections. It has not been arranged yet as first the museums' one should be put to an end.
Politics » Be a reporter: Write and send your article
Advertisement
Advertisement
Expats.bg All Are Welcome! Join Now!
More from Politics