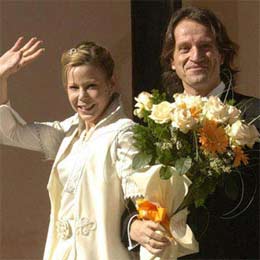 The happy parents pictured here after their wedding. Photo by wikipedia.org
Bulgaria's Princess Kalina, who gave birth to a boy earlier on Wednesday, named the baby after her father, exiled king Simeon II.

The baby boy came to the world at 7:07 a.m. much to the surprise of mother and doctors, as Kalina was expected to deliver not earlier than March 20, press secretary of the royal family Dalya Dicheva announced. The newborn is 49 centimetres of height and weighs 2.626 kilos.

"The baby started to get out pretty unexpectedly. During the night Kalina felt pain. Around 5 a.m. we took her to the Lozenets Hospital and doctors decided she must undergo a Caesarean as this will be best both for mother and baby, even though Kalina and Kitin wanted the baby to be born naturally," Dicheva explained for Darik News.

The parents are extremely happy, as they did not want to know baby's sex before the birth. The excited grandparents, Simeon II and Dona Margarita visited the hospital later in the day. It is still not known how long the Princess will stay in the hospital.

Kalina's baby is the 11th grandchild of Simeon Saxe-Coburg. Strangely enough, none of his six grandsons is named after him.

Spanish media often name Kalina as "extravagant" and "provocative". She is one of the few European aristocrats who dare to experiment with her looks. Some ten years ago she shaved her head because she lost a bet.

Kalina has always said she loved Bulgaria very much and that is why she chose to marry and later give birth to her first baby in the country as she feels a true Bulgarian.