Britney Tried to Hang Herself 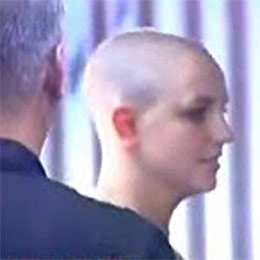 Britney hit the headlines again as she tried to strangle herself with bed sheets in the rehab she is currently staying. Photo by abc7
The pop star Britney Spears tried Saturday to commit a suicide in Promises rehabilitation centre, where she has been admitted for treatment, the web site Earthtimes reported.

The world famous singer wanted to hang herself making a "rope" of her sheets but she was saved by the clinic's staff.

Before attempting her life, Britney wrote the number 666 on her shaved head and started yelling: "I am the Antichrist!"

The doctors think the star's strange behaviour recently is due to the depression that came over her after she gave birth to her second child.

On February 16, Britney left a clinic on Antigua Island, where she spent less than 24 hours.

After that, the mega star shaved her head bald, had lips inked on her wrist and run away from California's Promises clinics several times.

Spears has also made a list of people, who she wishes to be dead. It includes her ex husband's name as well.

After getting divorce with the rapper Kevin Federline, Britney threatened to take her own life if their two children were placed under his guardianship.

Fereline, however, visited his ex wife in the clinics and promised he would reconsider their relationship if she mended her ways.

As a result, Britney said she was even ready to give birth to one more baby, who would strengthen their family.