Up the Hills and into History 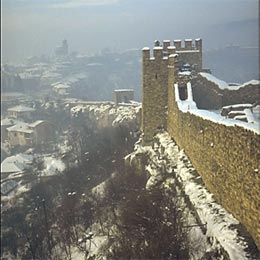 Photo by bgimages.bg
Bulgaria's history is a rich one, speckled with fierce battles and great leaders and throughout the country there are places that have kept the spirit of those times. A preferred destination for retirees from the UK, Veliko Tarnovo is one such place - a place where modern time visitors can submerge themselves in Bulgaria, as it was years and years ago, and almost hear the echo of swords crossing.

My first impression of Veliko Tarnovo, when I visited it more than a decade ago was that the whole city was made entirely out of hillocks. I remember going up and up and up, only to reach a place where I had to go left and then up and up again. In reality, the city, placed in the foothills of the Balkan in central Bulgaria, lies on three hills - Tsarevets, Trapezitsa and Sveta Gora. Its picturesque nature, its feel for history and the fact that it has always been a cradle of arts, has made Veliko Tarnovo a must-go spot not only for tourists but also for Bulgarians who want to get back in touch with their roots.

The city has witnessed a lot of the country's history, and it has kept many records of the triumphs and tribulations in the fortresses, palaces and churches, preserved for nine centuries. The Baldwin Tower still reminds Bulgarians that their leaders once captured none other but the emperor of the Latin Empire, Baldwin of Flanders himself. Defeated by Bulgaria's Tsar Kaloyan at the battle at Odrin in 1205, Baldwin spent his last years locked in the tower, the legend says.

The most impressive historical remains are without a doubt at the Tsarevets hill, where the old fortress still looks unconquerable, although it hasn't had to prove the sturdiness of its walls in years. If you are lucky enough, you may even get to see the Lights and Sound show, held on special occasions, that makes the glory of the old days come to life and moves even those who have never felt any connection with Bulgaria's history before.

Veliko Tarnovo's architecture is yet another of the reasons, why one shouldn't forget to make a stop in the city while in Bulgaria. Excellent examples of the Bulgarian national revival period still grace the streets and the architects' skills at finding the right place for each house despite the unfavorable terrain amaze even today. With their small wooden balconies, tiny windows, creeping vines and aromatic geraniums, the houses there look like they have been taken out a fairy-tale. A tale of Bulgaria and its struggle to rebuild itself and find its national identity after five centuries under the Ottoman rule.

Veliko Tarnovo may not be the most ancient Bulgarian city but it is, without a doubt the most Bulgarian city, brochures boast. And whoever wrote that was not far from the truth, as this city, a mixture of the modern-day struggle to be more European and the legacy that has been piling up for centuries, truly represents the country and its people.