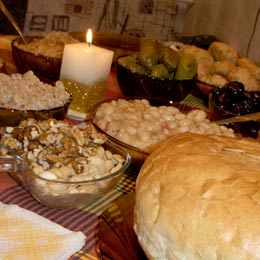 The meals Bulgarians have at the Christmas Eve dinner have to be an uneven number, seven at the least and they've all got to be Lenten. Photo by Petya Sabinova (Sofia Photo Agency)
Many rules, passed on from generations, regulate the preparation of the Christmas Eve dinner in Bulgaria and the main one concerns the number and type of dishes that have to be on the table.

Throughout the country traditions vary, but some things are certain. The meals have to be an uneven number, seven at the least and they've all got to be Lenten. Normally this dinner would mark the end of the great Advent Lents that had started forty days ago.

Beans, fruits and a round home-baked bread called "bogovitsa" are among the meals that have to be present. A coin is mixed with the dough of the bread and it is believed that whoever receives the piece with the coin would be extremely lucky throughout the year.

A dish of boiled wheat with a burning candle on top is the first placed on the table. The wheat is also used in Bulgaria when holding a wake or commemorating the dead.

The "oshav" a special compote of dried fruits is one of the desserts most associated with Christmas Eve in Bulgaria and is one of the meals that would probably take a central place on many tables Saturday night.

When the family is done wining and dining, a piece of the bread is left on the table until the next day, for the Virgin Mary.