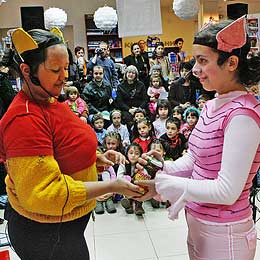 The theatrical event was organised by local honey producer BulMed to mark the 80-th anniversary of the popular character of A.A. Milne.

Parents were welcomed to bring their children to Sofia-based Orange centre to hear stories read, sing songs, do chants and musical activities and have some treats.

The Bear of Very Little Brain and his friends from the Hundred Acre Wood have delighted generations of readers since Winnie-the-Pooh was first published in 1926. Much of the book's popularity is due to Ernest H. Shepard's charming illustrations in full colour on cream-colored stock.