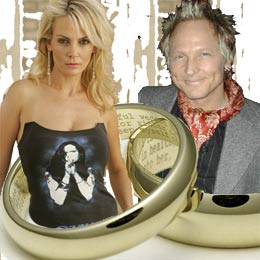 Matt Sorum has asked Sonia Vassi to marry him, the former Playmate shared. Picture by Sofia News Agency
Matt Sorum, former drummer of Guns N' Roses, has proposed to the hot and sexy Sonia Vassi - the first Bulgarian to ever appear in US Playboy.

Bulgarian media quoted Vassi herself, but did not disclose her answer.

A former girlfriend of Slash (Guns N' Roses) and Paul Stanley's (Kiss), she is also the lead singer of LA rock band Naked.

Sonia's future husband Matt Sorum has played in Guns N' Roses (1990-1997), Hawk, Johnny Crash, and The Cult. He is currently the drummer for Camp Freddy, Circus Diablo, Velvet Revolver, and his own solo-album Hollywood Zen.

The Playboy Bulgarian has a daughter from her previous marriage to US baseball star Brady Anderson.