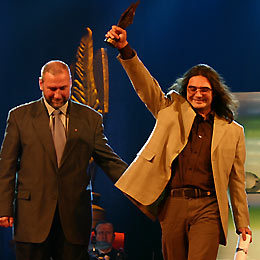 BTA's chief Maxim Minchev, himself a dedicated journalist for decades, received the honorary statuette and thanked the jury and his colleagues for landing it on his team.

After five years of earned prestige, it was decided that the annual award will be further decided by a 12-member academy.

Chernorizets Hrabur award is named after one of first Bulgarian letters scholars.

In the Photo journalistic category the prize was handed to Anton Cholakov from Standard daily. The grand prix for investigative journalism was bestowed on another member of the same media - Vladimir Yonchev - for his series of articles on "Underworld".

After last year the work of journalists in electronic media was recognised for the first time, in 2006 the Union of Electronic Media refrained from participation over "unclear criteria and vague rules".