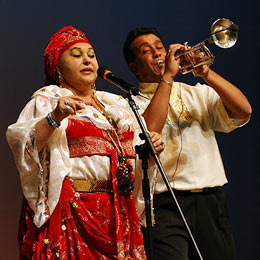 Her appearance was a gift for movie maniacs before showing the Cinemania 2006 gypsy-story movie "When the Road Bends...". The film is a unique production shot during a US tour of four gypsy bands in 2001.

"When the Road Bends...", which features also a pro-Roma interview with Johny Depp, is dedicated to the Decade of Roma Inclusion, chaired currently by Bulgaria.

The director of the National Palace of Culture Hristo Drumev personally greeted Esma.

The Skopje-born music diva enjoys a long singer career for more than 45 years, with thousands of stage appearances, countless humanitarian concerts and actions.

Known to her audiences simply as Esma, she was born in Skopje in 1943 to a Rom-Jewish family. She was the first Balkan performer to make Romani music popular with non-Rom in the early 1960's.

Her career of folk singer began after the contest on Macedonian national radio when she was twelve. Topmost Macedonian musician Stevo Teodosievski, later her caretaker, master and husband, discovered her and transformed her vocal talent in Balkan and later world known voice.

In India in 1976 Esma was acclaimed the Queen of Romani Songs. At the Festival of Roma Experiences in Moscow in year 2000 Esma was proclaimed Laureate and Roma Singer of the Century. Esma and Ensemble Teodosievski have performed for many heads of state, including Indian Prime Minister Indira Gandhi.

In 2002 Esma received the Mother Teresa Award and was nominated as United Nations Ambassador for Refugees in Macedonia.

Esma and her late husband adopted forty-seven boys and educated them in music and cultural traditions before they were eighteen.

All members of the Teodosievski family have become professional musicians, composers, arrangers, and leaders of their own bands.