Switzerland? No, This is the Paradise of Smilyan! 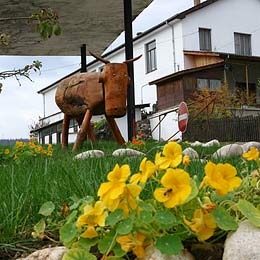 "Milk House", says the sign, and after yet another elbow in the winding village road, I am accosted by a regal cow made of....wood. Photo by Yuliana Nikolova (Sofia Photo Agency)
Mention the village of Smilyan to a Bulgarian, and he will be quick to tell you the story of the gigantic kidney beans grown here. But it is as the only producer of yellow cheese in the country that the village is gaining popularity now.

"Milk House", says the sign, and after yet another elbow in the winding village road, I am accosted by a regal cow made of....wood.

We have made a cult of the cow, although it does not enjoy the status of a sacred animal, Milkana Yordanova, called here the ideologist, welcomes us with a wide smile to the complex "Milk House" in the Rhodope village of Smilyan. One of the oldest settlements in the Central Rhodope Mountains, it is picturesquely located along the banks of the Arda river, at an altitude of 820 m above the sea.

Hundreds of cow puppets of all colors and sizes meet us once inside the complex hotel, the only hotel in the country which boasts a dairy.

"We have a tradition here," says the ideologist and also manager of the complex, sweeping with a wide gesture the herds of good-natured, lactiferous animals, carefully arranged along the fireplace, tucked inside cupboards and hanging from pillars among the tables in the lunch room.

"Every time a visitor comes to our hotel for the second time, a cow puppet is brought as a present," says Milkana, whose name it seems - fortuitously or not - have predetermined her destiny.

The cozy hotel bears no resemblance to the leviathans from the years of past decades, yet there is no shortage of space. Up in the room there is a whiff of touching hospitality and balconies with a view out over pine and beech forests, vast pastures and lush meadows. In the bath a pocketsize amiable cow gives you a smile once you reach for the soap.

Mention the village of Smilyan to a Bulgarian, and he will be quick to tell you the story of the gigantic kidney beans grown here. But it is as the only producer of yellow cheese in the country that the village is gaining popularity now.

The dairy, part and parcel of "Milky House" complex, is located a few feet away from the hotel. Built with the assistance of the Swiss government, the equipment of the dairy house is designed for the production of hard or semi-hard yellow cheese from Swiss, Italian and Dutch recipes - Emental, Gruyere, Tilsit, Gouda, Parmezan, Pecorino.

Thus Bulgaria, which proudly claims to have invented the yogurt and given the world the secret to longevity, now proudly puts the start of the yellow cheese tradition. Despite a 100% match in technology, the yellow cheese produced in Bulgaria has its distinctive taste and flavour.

Back in 1994 the Bulgarian market was not prepared for the Swiss yellow cheese and we launched the operations of the dairy with the production of traditional Bulgarian kashkaval, Switzerland-trained technologists from the dairy explain.

Over the years the dairy started the production of yellow cheese, while the taste of Bulgarians got more refined, getting close to that of Europeans. Now found at supermarkets in all Bulgarian cities, yellow cheese is appearing more and more often on the nation's table - the tenderness of a slice of Gouda and the touch of sweetness in a slice of Emental have turned these two into everybody's favorites.

Good hosts care about comfort. I remember an early autumn night fizzing with shooting stars when we dragged kitchen chairs into the garden in front of the hotel for a feast of red wine and patatnik, served with yoghurt. I remember every exhilarating crumb of a generously buttered bread in a biting wind, while climbing a Rhodope Mountains peak. I remember lunching on sun-baked rocks, eating milky cream harvested from the pastures that lapped our chosen spot.

It takes a week for a visitor to have that taste of Smilyan paradise and the dishes prepared here.

In the winter visitors to the hotel most often combine their vacation in Smilyan with trips to the ski runs at the winter resort of Pamporovo, which is located near the village. In the summer tourists may also plan a few days at the Black Sea, though more often than not the sylvan pleasures take the upper hand at the expense of the coastal leisure.

A milky dinner or lunch is the special find on the menu here, an offer one can hardly resist. Visitors to the hotel may taste the whole range of yellow cheese produced at the dairy, as well as milk prepared from the oldest technology in the region.

"It dates back to more than 200 years ago when it was kept in lamb skin bags," the producers at Milk House start to unveil the secrets of their craftsmanship.

Picknickers can choose to dine al fresco on lawns, on canopied terraces or in the shelter of a penthouse, which still houses many of the attributes of good sheep and cow breeders. One can clearly picture them with a cap, red shawl, saddlebags, crook and silyahluk, a bag worn round the waist, where they kept among other things a nosegay from his loved one or magic nosegay to keep wood-nymphs away.

A lively 70-something-year-old woman nimbly crosses the garden in front of the hotel. In her hands she holds a splendid bouquet, while the smile on the face shines over the freshly picked flowers.


Grandma Albena, as she is introduced by my kind hosts, does occasionally the everyday's chores at the dairy. But I see her only as the reincarnation of the spirituality and traditions of the Rhodope Mountains, which, legends say, was the cradle of the mythic musician Orpheus.

"Do you understand me?", she says in a totally incomprehensible to me local dialect and looks at me expectantly.

It is only music that I hear in her voice but without any hesitation I nod assent.