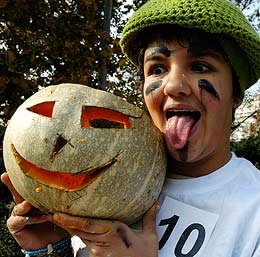 Most celebrated in the US, Halloween has now spread its influence mainly as a commercialised event in many countries that did not celebrate it ten years ago, Bulgaria included. Photo by Kameliya Atanasova (Sofia Photo Agency)
As Halloween - the time of ghosts, goblins, gravestones and graveyards - approaches, Hilton Sofia conjured up a gruesomely amusing offer.

On October 29 the Seasons Restaurant at the Hotel Witch will welcome its visitors with a scary drink, while our Halloween Brunch buffet will feature many "dreadful" delicacies. Traditzia Foundation will provide the creepy Halloween decoration, so that visitors can purchase the most daunting monsters, spiders and pumpkins for the celebration on the 31st of October!

Tuesday night will be dedicated to the frightening fantasies and scary stories featuring ghosts, witches, monsters, evils, elves and pumpkins. Artists Bar & CafГ© will throw up a freak-and-shriek Halloween Party. Fearsome Halloween drinks and snacks as well as live entertainment will be offered.

Halloween is based on the ancient Celtic holiday 'All Hallows Eve', that marked the only day of the year when dead spirits were allowed to walk the earth.

Most celebrated in the US, Halloween has now spread its influence mainly as a commercialised event in many countries that did not celebrate it ten years ago, Bulgaria included.

The tradition of carving pumpkin lanterns on Halloween comes from the legend of the drunk Jack who tricked Satan into letting his soul alone when he died, only to find out that the Heavens didn't want him either. After a lot of pleading with the devil the trickster received a burning ember to light his eternal wanderings in the darkness. Jack carried the ember in a hollow pumpkin, nowadays represented by the Jack-o-Lantern.