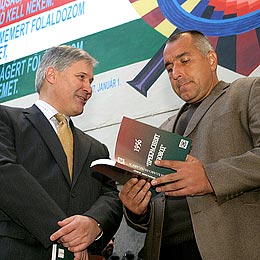 A failure as an actor, Petofi became the author of exquisite lyrics. He composed the national poem "Talpra Magyar" (1848), and several epics, including Janos Vitez (1845). His poetry served as inspiration to the patriots of the Hungarian revolution, in which he was killed.

The "Poetry on the Wall" project is an initiative of the Dutch embassy gathering the embassies of all EU Member countries.

It aims to popularize the versatility of the European languages and literature by "adopting" a wall in the center of Sofia and adorning it with a poem by a local author, written in their native tongue.