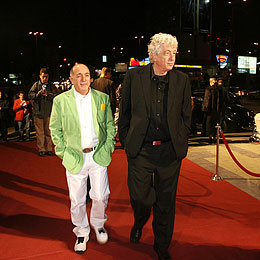 New Image Bulgaria's head David Varod (L) arrived together with the company's CEO Avi Lerner (R), at the premiere of The Black Dahlia at City Centre International in Sofia. Photo by Yuliana Nikolova (Sofia News Agency)
Red carpet, gloss-sparkling limelight and a flock of stars marked the Sofia premiere of The Black Dahlia - the most expensive movie ever made in Bulgaria.

The production of Nu Image, premiered at City Centre International (CCI), has brought together onto screen Hollywood stars such as Josh Hartnett, Aaron Eckhart (as the two detectives assigned to the case) and Scarlett Johansson (their roommate), as well as Hilary Swank.

The movie The Black Dahlia promises to be one of the most complex crime dramas of the year.

It is based on a true unsolved murder - one of the most sensational crimes in Los Angeles history. On the morning of January 15, 1947 a woman walking by an empty lot discovers the mutilated corpse of wannabe actress Elizabeth Short.

The 22-yearold victim had rich black hair and always wore black clothing along with a black flower in her hair, earning her the nickname The Black Dahlia.

The investigation of her death became an obsession to millions and revealed a vast conspiracy throughout the police department.

The murder story has been the subject of countless books, a '70s TV movie starring Lucy Arnaz, and now a film-noir thriller by director Brian De Palma.