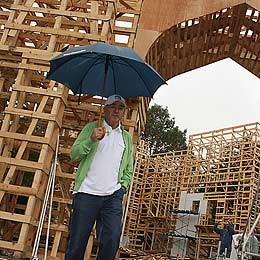 Cameras will start rolling for the USD 10 M production in two weeks, the movie-making company announced, and construction works are now going at full throttle at Sofia's Boyana film centre.

"We are currently building a grandiose set in Boyana," Nu Image head David Varod said. "We are recreating the desert city where all the action will take place."

Varod also added that the company is planning to shoot four move movies in 2007, each with a budget of over USD 40 M. Morgan Freeman and Scarlet Johansonn are just some of the big names that will be filming in Bulgaria next year, he hinted.

"As you can see I have kept my promise and Nu Image continues to make movies, despite the delays of the deal for Boyana," Varod said. He added that the premiere of the company's award-winning move Black Dahlia would be next week, and that it is just a matter of months before their thriller Children of Wax, directed by Bulgaria's Ivan Nichev hits the screens worldwide.

"I hope that by next year Nu Image Bulgaria will employ 1,000 people and we will finally be able to film a movie that's 100% Bulgarian," he added.

War Inc. is set in the future, when the desert country of Turagistan is torn by a riot after a private corporation, owned by the former US president, has taken over the whole state.

Cusack plays the role of a hitman, who suppresses his emotions by gobbling down on hot sauce and is hired by the corporation's head to kill the CEO of their competitors. Everything changes when the ruthless killer finds himself head-over-heels in love with a sexy reporter, who is on the hunt for the truth behind the fake war. Teen idol Hilary Duff also stars in the movie.

John Cusack is the probably the most famous from his family of actors, but his father and four of his siblings also have a series of on-screen appearances. He has starred in hits from all genres, including Being John Malkovich, Con Air, High Fidelity and Identity.