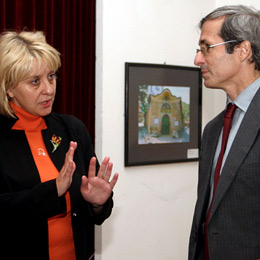 French Envoy to Sofia Yves Saint-Geours (R) talks to Deputy Culture Minister Ina Kileva (L) during a farewell meeting Friday on the occasion of the start of a global tour of four Bulgarian treasures from Thrace. Photo by Y. Nikolova (Sofia Photo Agency)
Four of Bulgaria's world-famous golden treasures dating back to Thracian times will leave for exhibition at Paris' Jacquemart-Andre Museum.

More than 100 pieces of gold artifacts from the Rogozen, Panagyurishte, Borovo and Letnitsa treasures will reveal the high mastership of ancient Thracian arts to the French audience.

The official inauguration will take place October 13 in Paris in the presence of Bulgarian Prime Minister Sergey Stanishev, and both culture ministers of Bulgaria and France, it was announced Friday in Sofia.

French Ambassador to Sofia Yves Saint-Geours has praised both countries' efforts for bringing closer to people the Bulgarian and French culture.

After Paris, where it will stay until January 31, the treasures' set will leave for Basel, Switzerland and then to Japan where the exhibition will stay for a year.

The exhibition reveals the virtuosity of ancient goldsmiths, who have apparently reached the pinnacle of arts. The artifacts - witnesses to a particularly brilliant civilization - impress with their decorative richness, the Jacquemart-Andre Museum said in a notice on its website.