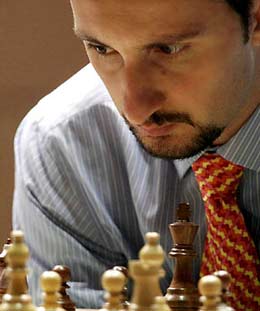 Fast and well-planned moves are said to be the new strategy of Vesselin Topalov in Elista. Photo by BTA
Despite the scandal over Vladimir Kramnik's frequent visits to the toilet during matches, he continues using the same toilet and with the same regularity, sources of Darik News claim.

There is a change in Vesselin Topalov's strategy; he undertakes fast and well-planned moves and they aim to discourage Kramnik from leaving his seat, the sources add.

As a result, the eighth game between Kramnik and Topalov ended with the first over-the-board victory for FIDE World Champion Vesselin Topalov. Thus the official score is now 4:4, with four games to go. The first player to reach 6.5 wins will be pronounced the ultimate winner.

The scandal at this unique contest, which pursued the unification of the world chess title, was triggered after the manager for Bulgaria's Topalov, Silvio Danailov, accused Russia's Kramnik of taking too many bathroom breaks. That was an apparent suggestion that he was secretly using a technical device or a computer program to help him with his moves, because the toilet is the only room without surveillance.

To add to the scandal, the house where Topalov is staying has been checked for tapping and surveillance devices, inside sources also say.

Fans define the events in the Kalmik Republic as an advertising trick initiated in order to raise greater public interest in the championship. There are rumours the two competitors have been paid by an additional sponsor in order to perform that theatrical play.