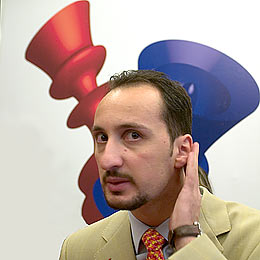 Bulgaria's Vesselin Topalov threatened to abandon the world championship match over the suspiciously frequent Kramnik's visits to the bathroom. Photo by Yuliana Nikolova (Sofia Photo Agency)
Bulgaria's chess king Vesselin Topalov has questioned the behaviour of his rival Vladimir Kramnik, who holds on to 2 point lead in their world championship match.

In a press release to the Organizing Committee of the match, Topalov's manager Silvio Danailov says the careful study of the video recordings from the rest rooms done by the technical experts of the Bulgarian team revealed that after each move Kramnik immediately headed to the rest room and from it directly to the bathroom.

During every game he visited the relaxation room 25 times at the average and the bathroom more than 50 times - the bathroom is the only place without video surveillance, the press release says.

"Unlike Mr. Kramnik, the World Champion Veselin Topalov spends his time mainly at the playing table. The average number of times he visited the rest room and the bathroom is 8 and 4 respectively."

Danailov point outs that the bathroom is the only place without video or audio surveillance and says the facts are quite strange, if not suspicious.

Topalov's team insists the use of the rest rooms and the adjacent bathrooms for both players to be allowed only with permission from the Arbiter and accompanied by an assistant arbiter.

"Should this extremely serious problem remain unsolved by 10.00 o'clock tomorrow (September 29th, 2006), we would seriously reconsider the participation of the World Champion Veselin Topalov in this match," the letter concludes.