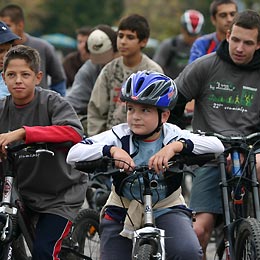 Scores of cyclists joined the car-free rally dedicated to Europe's Car Free Day. It is being celebrated annually since 1998, in more than 1000 cities across the EU. Photo by Kameliya Atanasova (Sofia Photo Agency)
Bulgaria has joined Europe's Car Free Day aimed both to reduce the use of cars and to improve road safety.

Recent figures, and particularly statistics of deaths on the roads, have suggested that much more must be done to reduce the number of fatalities on Bulgarian roads.

Across Europe, a total of 1295 cities will participate in Car Free Day - the highlight of this year's European Mobility Week - on September 22.

The aim is to raise public awareness about the fact that reducing motorized traffic in cities can improve our quality of life by reducing congestion, pollution and the number of road accidents.

There is nearly a car for every two people in the 25 member states of the European Union, yet road fatalities are down, recent EU statistics has shown.

Bulgaria will almost certainly contribute to disturb this statistics, taking into account the bulging road deaths statistics in the country. Media and observers have even named it "a war on the Bulgarian roads" and launched massive campaigns to curb rules-violating and over-speed driving.