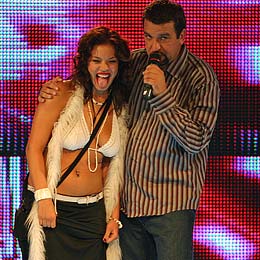 Diana (L), who broke up with her boyfriend with fight a year ago, minutes before she is shocked to see her former loved one among the roommates in the house of Big Brother 3. Photo by Kameliya Atanasova (Sofia Photo Agency)
Big Brother 3 has served another portion of shock and sensation after it announced the birth of a baby will take place live in next three months.

Svetlana, 33, a mother of a child, entered the Big Brother house in the seventh month of pregnancy. Despite claims that her husband fully supports her in every decision, Svetlana revealed her baby's father is another man.

A former love couple who split with fight a year ago were amazed to see each other as inescapable roommates for the next trimester.

Producers of the show have cooked another surprise to its dedicated viewers by letting unto the house Eva, wife of Marian - an eccentric playboy from the second edition.

Love or religious confession will probably contest for the recognition of hot topic of Big Brother 3, as a clergyman has joined the merrymaking group in Boyana neighbourhood. The appearance of Todor will surely trigged discontent with the Synod, as in the very first start of the reality show the Bulgarian Orthodox Church has anathematised it.

Age clashes are also on the horizon instigated by the co-living of people as young as 18 and as old as 57.

May be taking into account the crushing male prevalence among winners in the first two editions, Big Brother 3 has let the door open for more women than men.

This season the turmoil and tension inside four walls will be lavishly awarded with half a million levs (EUR 250,000).