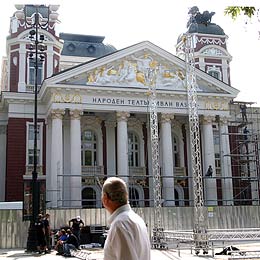 For several months scaffolding was propped up to enable renovation works of the theatre's outdoor decoration.

The unique facade of the theater building was reconstructed and refurbished with EUR 100,000 funded under the Beautiful Bulgaria project. More than 100 constructors, restoring artists and designers took care that the theatre gleams in new outlook.

The National Theatre "Ivan Vazov" was built in 1906-1907, featuring on top Greek mythological figures. The triangular white and gold frieze above the front stairs shows Apollo and the Muses, and twin towers on either side of the building depict the Goddess Nike in a chariot.

The interior was restored in 1929, after a fire had destroyed it six years earlier. The fountain and its reflecting pool in front of the theatre building were built in 1976.