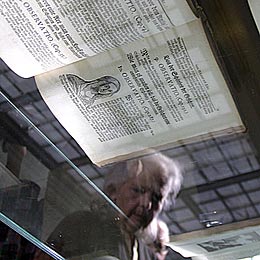 A highlight in the exhibition is the original "Treatise on Painting", a selective compilation of Leonardo Da Vinci's precepts on painting. Photo by Nadya Kotseva (Sofia Photo Agency)
Sixteen precious original works of genius Da Vinci and art by other Renaissance masters are on display at the National Library in Sofia, where they will thrill audiences for the next few weeks.

Security measures at the National Library have been beefed up to the maximum for the first of its kind exhibition - "Leonardo Da Vinci. The Artistic and technical painting during the Italian Renaissance."

The priceless works arrived at Sofia Airport Friday night and the masterpieces were transported to the national library in a perfectly organized, swift operation.

A highlight in the exhibition is the original "Treatise on Painting", a selective compilation of Leonardo Da Vinci's precepts on painting.

The treatise is a key in understanding Leonardo's artistic theory, modern scholars believe.

Scholars and art connoisseurs will have the thrilling opportunity to explore Leonardo's keen eye and quick mind in Sofia from September 18 to October 10.

The exhibition is organized under the patronage of Parliamentary speaker Georgi Pirinski and Italy's Ambassador H.E. Gian Batista Campagnola.