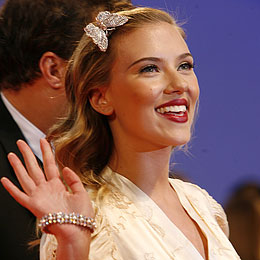 US actress Scarlett Johansson waves to fans upon her arrival for the screening of her movie "The Black Dahlia" at the 63rd edition of the Venice film festival. Photo by BTA/AP
Hollywood star Scarlett Johansson has told the Daily Record that she was fascinated by the number of Nazi souvenirs she found in Sofia shops, while shooting the Black Dahlia in Bulgaria.

Johansson, who also has Sofia's romantic atmosphere to thank for her blooming affair with actor Josh Hartnett, spent hours exploring Bulgaria's capital and the historic junk on sale.

"There are a lot of strange things," the Hollywood beauty told the paper. "Like if you go to markets, there is all this Nazi paraphernalia you can buy. It's really interesting."

Johansson admitted that he liked Sofia, calling it a "fascinating city."

The Black Dahlia, the most expensive movie ever shot in Bulgaria, was one of the most praised at this year's film festival in Venice.

The latest film of Brian de Palma was shot by US moviemaker Nu Image, the company that acquired 95% stake in Bulgaria's state film center at the beginning of July.