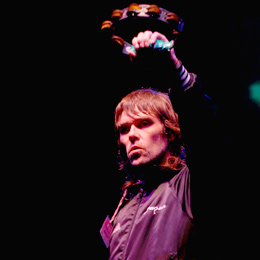 MTV Exit was participated by both international and Bulgarian music whizzes - including Brit-pop sensation Ian Brown, the Scratch Perverts, Ollie Teeba and Herbaliser.

Then party enthusiasts moved to the Black Box nightclub to continue the dance marathon.

Organizers of the event, which Bulgaria was experiencing for the first time, said fans had gathered at the airport to welcome Ian Brown.

In return, the hot musician treated fans with immaculate sound, and performed some of his biggest hits, including "Dolphins Were Monkeys."