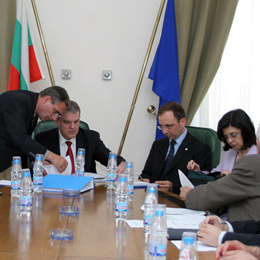 EU-integration Minister M. Kuneva (R), State Administration Minister N. Vassilev (C) and Interior Minister R. Petkov (L) presenting the the results from the work of the Council of Ministers Inspectorate and the Commission for corruption fight.Photo by GIS
Some 53 Bulgarian state employees and 22 servicemen of the Interior Ministry have been sacked over corrupt practices in the first six months of the year.

This was announced by Interior Minister Rumen Petkov when presenting the results from the work of the Council of Ministers Inspectorate and the Commission for corruption fight and prevention.

From all 66 measures included in the Strategy for corruption fight 57 have been fulfilled and 9 are about to be completed, the report of the interior minister also showed.

Some 24 indictment acts against magistrates and people working at the high levels of the state institutions have been filed since the beginning of the year. Data from the Prosecutor's Office showed that in the January-July period in four cases the people indicted were found guilty.

Rumen Petkov also pointed out that by June 12 legal proceedings have been launched in 36 corruption cases, whereas 16 other cases are being checked. Over the same period a total of 179 corruption signals have been filed. The Financial intelligence agency is also working on two new money laundry cases, Petkov explained.