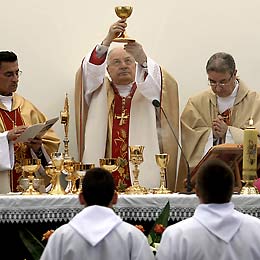 Vatican Secretary of State Cardinal Angelo Sodano consecrated the cathedral himself before over a thousand Catholics from all over Bulgaria and Macedonia.

The cathedral's first stone was sanctified by Pope John Paul II, during his visit to Bulgaria in 2002. The new building rises where the old catholic cathedral in Sofia stood. It was destroyed during the bombing of Sofia in 1944, even before it was completed.