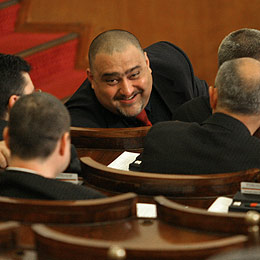 The prosecution has gathered enough evidence to accuse Chernev of hooliganism and causing light bodily injury to Ivaylo Dachov.

Velchev decided that the Supreme Prosecution should look into the case and see whether the district attorney was right in claiming the MP immunity.

In 2005 Chernev beat up Dachov before the office of Skat TV, where nationalists Ataka (Attack) leader Volen Siderov has a show. Chernev was expelled from the party after a row with Siderov over a car incident at Bulgaria's Trakiya highway.

The MP turned against his leader, admitting that he had coerced him into lying before authorities.