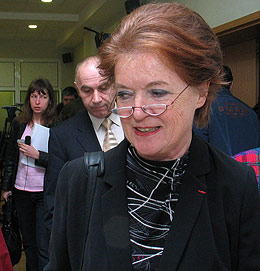 The President of the European Economic and Social Committee Anne-Marie Sigmund, who is on a visit to Sofia, pointed out that the institution is fully supporting Bulgaria's timely accession to the European Union.

Still, if the safeguard clause for Justice and Home Affairs becomes effective, Bulgaria should not see that fact as punishment, but as an invitation to get to work and complete the tasks, Anne-Marie Sigmund underlined.

Tuesday was the last day of the official visit of President of the European Economic and Social Committee. She was accompanied by EESC Secretary General Patrick Venturini. The two leaders of one of the most influential European institutions in Brussels had meetings with Bulgaria's Parliamentary Spokesman Georgi Pirinski and Prime Minister Sergey Stanishev.

The delegation also participated in the plenary session of the Economic and Social Council of Bulgaria, where the Annual Report on the Activities of ESC in 2005 was be adopted.

The delegation's visit was at the invitation of the Economic and Social Council of Bulgaria. EESC, due to its status, obligatorily comments in advance important decisions that the European Commission has to take.