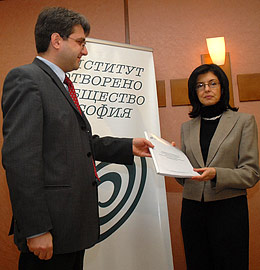 This file photo shows Euro-Affairs Minister Meglena Kuneva receiving the previous report of Open Society Institute Sofia on the implementation of the engagements in the areas of serious concern highlighted in the EC report. Photo by K. Atanassova (SNA)
Bulgaria still has a chance to meet the requirements in time to join the European Union on January 1, 2007 but only if it maintains the current high pace of reforms, say Open Society Foundation experts.

The report, which was presented and handed to Euro-Affairs Minister Meglena Kuneva on Sunday, assesses the implementation of the engagements in the areas of serious concern highlighted in the EU Executive unit report from October.

The European Commission monitoring report on Bulgaria singled out five areas of serious concern in the adoption and implementation of the EU legal order - freedom to provide services, company law, agriculture, regional policy and justice and home affairs.

Due to delay and inefficiency in the implementation of key reforms in the fields of Agriculture and Justice and Home Affairs, experts warned of the risk of enforcing safeguard clauses, particularly in the justice field.

Two months before a new monitoring report is issued, 88% of the measures, planned by the Bulgarian government to overcome the delay in the critical areas, have been more or less implemented, the report says.