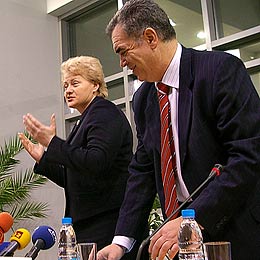 European Financial Programming and Budget Commissioner D.Grybauskaite (L) met with Dimitris Kourkoulas (R), Head of the Delegation of the European Commission to Sofia. Photo by Nadya Kotseva (SNA)
There are no financial obstacles for Bulgaria's entry into the European Union (EU) on January 1, 2007, European Financial Programming and Budget Commissioner Dalia Grybauskaite said.

Dalia Grybauskaite, who is at an official visit to Bulgaria met with Prime Minister Sergey Stanishev and Dimitris Kourkoulas, Head of the Delegation of the European Commission to Sofia.

Grybauskaite commented that Bulgaria still has a lot to do to boost the capacity of the administration for absorption of the EU funds. I believe you have enough time to do that, Grybauskaite stated.

She also underlined that the European Commission is pleased with Bulgaria's achievements in the field of the financial control, interior audit and cash flow and the preparation of budget 2007.

The challenges are big, but Bulgaria's financial system is stable and the macroeconomic situation in the country is very good, Dalia Grybauskaite also said.