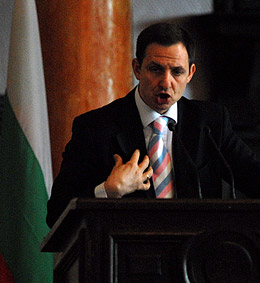 Sofia-visiting MEP Jorgo Chatzimarkakis expressed optimism in the timely accession of the country to the Union in view with "the achievements made so far by the Bulgarian government". Photo by Kameliya Atanasova (Sofia News Agency)
The European Union urgently needs the Bulgarian workforce and intellect, should it wants to preserve its competitiveness, according to a Sofia-visiting MEP.

Bulgaria can contribute to Europe with its highly qualified and low-cost labour force, Jorgo Chatzimarkakis from the European Parliament's group of ALDE said at a lecture delivered in Sofia.

He expressed optimism in the timely accession of the country to the Union in view with "the achievements made so far by the Bulgarian government".

Yet Chatzimarkakis reminded the possible introduction of the safeguard clause concerning the judiciary and home affairs could equally occur before and after Bulgaria joins the bloc of 25.

This safeguard clause is identical with the one included in the Accession Treaty of EU10 and provides for a possible enforcement within three years from the moment of actual membership.

Jorgo Chatzimarkakis praised the future role of Bulgaria as an important player in the field of energy security. "The use of nuclear energy is indispensable, should the EU wants to ensure its own energy independence and security," he pointed out.

Within his lecture on Thursday the MEP dwelled also on the issue of the European Constitution and its rejection at two national referendums last year, the growing threat of China's market rivalry, the problems concerning EU's labour market, cultural identity and globalisation.