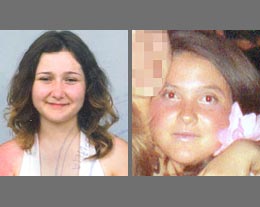 Kristina, 15, and her sister Rositsa Belneyska, 18, were raped and brutally killed at the end of January. Photo by www.rdvr.pazarjik.com
Police investigating the gruesome murder of the two sisters from the town of Pazardzhik is to release an e-fit picture of a witness, believed to have last seen them.

A description of the witness, a girl, said to be about 19-year-old, will be provided by Borisslav Daskalov, a district coordinator and municipal councilor from Bulgaria's Roma party Evroroma.

Daskalov claims that there is only one witness of the murder, a friend of one of the two sisters, Rositsa.

According to him the police knows who killed 18-year-old Rositsa and her sister Kristina, 15, but the attackers are now outside Bulgaria.

The two sisters went missing at the end of January after leaving a disco bar in Pazardzhik. Rositsa and her sister Kristina were found raped and beaten to death at the beginning of February near the town of Peshtera.

More than a month after the brutal murder that shook the whole country, police has neither seized the perpetrators nor fingered any suspects.