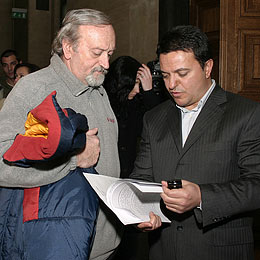 A Sofia court proceeded with the case admitting all evidence lodged under it. Defendants are Doktora's ex-associates in a financial consultancy company, including Peter Petrov, dubbed Amigosa, and brothers Doychin and Dimitar Miryanov.

The case against Ivan Todorov was closed due to his death. The businessman, whose name became household after a miraculous bombing survival in 2003, was mercilessly killed February 22 on a busy downtown boulevard in Sofia.

The prosecution brought grave charges against the three defendants accusing them of large-scale laundry of money earned through cigarette smuggling.

According to the prosecutor, the scam has operated since 1997. The illegal traffic channeled Macedonia and Bulgaria and was legalised by means of false commercial contracts.