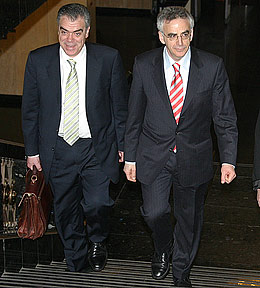 Two months ahead of the crucial evaluation EC Director General for Enlargement Michael Leigh paid a work visit to Sofia to discuss the results of recent peer reviews in red-flagged areas, such as corruption and anti-organised crime fight, environment and agriculture.

"The European Commission does find certain progress in Bulgaria following the October monitoring report, but there are still areas raising serious concerns," he said after meeting with Deputy Prime Minister and Foreign Minister Ivaylo Kalfin.

Asked if the upcoming report will be more positive than the previous one, Leigh declined to reveal details.

While conferring with Prime Minister Sergey Stanishev, the EC enlargement official was told the stricter monitoring is a guarantee that Bulgaria will be better prepared for the membership.

Meanwhile, Bulgaria's ministers of justice and of interior Georgi Petkanov and Rumen Petkov are in Brussels to meet EU Commissioner for Enlargement Olli Rehn.

In two months the European Commission will issue its final report on the progress of Bulgaria and Romania towards full membership.

It may then recommend, if needed, to postpone the accession of Bulgaria or Romania until 1 January 2008, if there is a serious risk of any of those states being manifestly unprepared to meet the requirements of membership by January 2007 in a number of important areas.


READ MORE in the "On EU Doorstep" SECTION