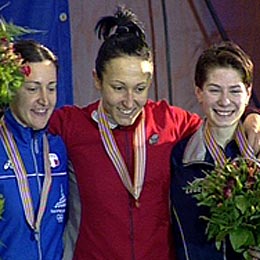 Evgenia Radanova (C) celebrates her victory in the 500-meter race in the European short track speed skating championship in Krynica Zdroj, southern Poland. Photo by www.ecshorttrack.com
Bulgarian Evgenia Radanova has grabbed the European Short-Track title after she finished first in all three legs of the races.

"I am really happy, especially because I didn't manage to win the title last year," Radanova has said. She also added that she hoped this would give her the needed confidence to dominate the upcoming Olympics as well.

Radanova's winning streak began Saturday, when she finished first in the 1,500-meter race. She then won the 500-meter one and was a mere kilometer away from the title.

In the 1,000-meter race held Sunday Radanova grabbed the gold as well, thus winning the European title for the sixth time in her career.