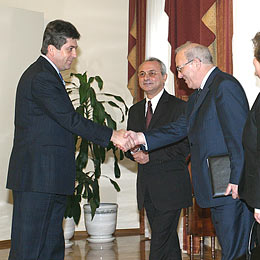 He convened Monday a meeting of the Consultative Council on National Security (CCNS) and added for the first time to the agenda the issue of Bulgarian population's meltdown.

The adverse demographic statistics in Bulgaria have already become an issue of the national security, President Parvanov stated. These alarming processes have a negative effect on certain social fields as well, he said.

In conclusion, the national security body decided to draw a strategy to overcome the demographic crisis in the eight-million country, where worst predictions see a population decrease down to five million by 2050. The strategy is to coin mechanisms to decrease birth and child rates, as well as to envision stimuli for families to take care after their children.

Meanwhile, Bulgaria's head of state urged that the issue becomes an object of a broad-ranging public and political debate. He stressed on the importance to actively involve NGOs and media into the debate.