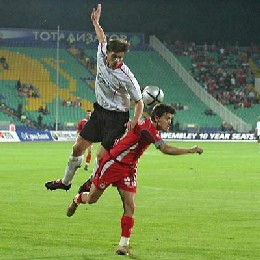 In Sofia, Liverpool FC beat CSKA 3-1, but as hosts allowed 0-1 in the first half of the return game. Photo by Sofia News Agency
CSKA Sofia won a shocker 1-0 over reigning European champion Liverpool on Tuesday night.

Valentin Iliev became the hero for Bulgarian football fans, when he hit the British net in the 15th minute.

Liverpool's dramatic efforts to reverse the score came to nought at the legendary Anfield Stadium.


What should have been a comfortable night turned into a real struggle, Liverpoolfc.tv wrote on Tuesday.

The match was a return for the first leg of a Champions League qualifier, when Liverpool won 3-1 over CSKA at the Vassil Levski Stadium in Sofia. During the August 10 clash, CSKA fans shouted racist insults at Liverpool's Djibril Cisse, which brought a FIFA sanction of CHF 30,000 to the Sofia squad.

The last time CSKA Sofia defeated Liverpool was in 1982.