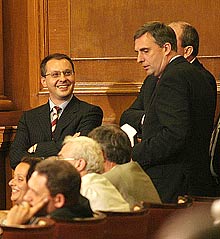 Socialist Party leader Sergey Stanishev, 39, claimed the post of Prime Minister, almost two months after the general elections and one failed attempt to form a government.

His nomination was backed by 168 of the 235 lawmakers who voted; 67 opposed Stanishev's candidacy.

Parliament members okayed the structure of the new Cabinet with a 169-67 vote, a total of 236 MPs participated.

The line-up of the Cabinet was approved by 169 lawmakers, while 68 opposed it.

The ministerial seats in the cabinet are distributed 8:5:3 among the Bulgarian Socialist Party, the centrist Simeon II National Movement and the predominantly ethnic Turkish Movement for Rights and Freedoms respectively.

The new ministers swore in minutes after the vote.

The mandate bearer MRF received three ministries and one deputy prime minister. The ministry of agriculture and environment were allocated to the MRF. They are to be headed respectively by Nihat Kabil and Dzhevded Chakarov. MRF deputy leader Emel Etem has been named deputy prime minister, responsible for handling natural calamities.

Non-socialist Plamen Oresharski, former deputy chair of the right-wing Union of Democratic Forces, will head the Finance Ministry after his surprise nomination in the Socialists-proposed government at the end of July.

The tourism and sports sectors will be managed by agencies.

Tuesday's parliamentary approval of the government came after fears that a delay in forming the next cabinet could jeopardize Bulgaria's entry into the European Union in 2007 and amid allegations that the election of Stanishev for prime minister is unconstitutional.

The right-wingers have pledged to approach the Constitutional Court in case the Parliament approves anew socialists' leader for prime minister. According to them the Bulgarian Constitution prohibits one person to be handed a government mandate twice.