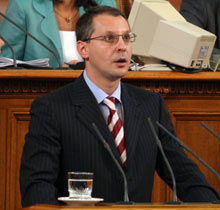 Out of 236 voting MPs, 67 voted against and no one abstained.

Stanishev, 39, was nominated for the premier's chair for a second time in seven weeks, now on the mandate of ethnic Turkish Movement for Rights and Freedoms.

He was elected prime minister on July 27, but the vote was scrapped after his failure to muster enough support for his draft cabinet.

The support for the new prime minister was gleaned by MPs of the three coalition partners - Coalition for Bulgaria, Simeon II National Movement and the MRF.

READ MORE about Sergey Stanishev in WHO'S WHO section