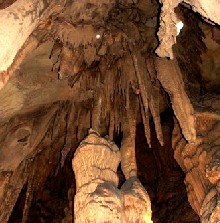 The spectacular site welcomed a week ago the first tourists after renovation works.

Bulgaria spent BGN 800,000 (approximately EUR 400,000) for building an elevator for the disabled, as well as for upgrading the lighting equipment.

More than 2,000 Bulgarian and international guests have visited the cave since June 26.

The cave is situated in the northwestern part of the Stresherski Balkan in the Vratsa Mountain, 16 km from the town of Vratsa.

Its entrance is at the lowest part of the Ledenika land depression, at an altitude of 830 metres.
Society » Be a reporter: Write and send your article
Advertisement
Advertisement
Expats.bg All Are Welcome! Join Now!
More from Society