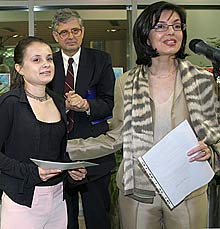 The annual awards are organised by the "St. Cyrill and St. Methodius" foundation and are awarded to students in Law or Economics, for their written works in the field of law or economics, related to the European integration of Bulgaria.

Bulgaria's Euro-integration Minister Meglena Kuneva presented the awards to the two winners. Joanna Ilchovska swept the first prize in the "Law" section, whereas Svetla Bognadova was awarded for her essay in the Economics section.

For the first time in 2005 the special contest "Ilko Eskenazi- Bulgaria and EU - Law and Economics Awards" was organized for all young Bulgarians interested in the EU integration process.

The Dr. Ilko Eskenazi Memorial Fund was founded in 1994 and is aimed at assisting the professional and academic growth of young people in the fields of law, economics and political sciences in Bulgaria.

Over the last ten years trough a contest the Fund picked 10 scholarship students thus founding a club of the law and economy students. The number of Club members is about 50: half of them are doing research in the area of economics, and the rest in the area of law.