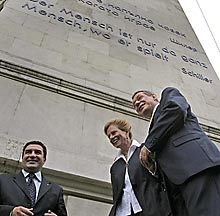 Dutch Envoy to Sofia H. van Lynden (C) joined the opening of a German-versed wall in Sofia. Bulgarian Sports Minister V. Ivanov (L) and German Envoy H. Kindermann (R) inaugurated the Schiller piece of “poetry on the wall." Photo by Y.Nikolova (SNA)
Verses of German poet Friedrich Schiller have decked out a front wall of the National Stadium "Vassil Levski" to line up a EU poetry project in Sofia.

"Man is fully a man only when he plays", reads a line of Schiller's poem inaugurated Tuesday by German Ambassador to Sofia Harald Kindermann and Bulgarian Sports Minister Vassil Ivanov. The opening was attended also by Dutch Ambassador Baroness Henriette van Lynden.

German ambassador extended gratitude to his Dutch colleague diplomat for the wonderful initiative proving that "besides politics and business, Europe can offer space enough for culture and sports as well."

The event was dedicated to the football World Cup 2006 to be hosted by Germany.

Sofia-based embassies of Greece, Belgium, the Netherlands, Luxembourg, Sweden and the United Kingdom have already adorned public buildings in the capital city with pieces of national poetry.

The Wall-to-Wall project dedicated to the signature of the EU Accession Treaty by Bulgaria on April 25 aims to promote the diversity of European languages and letters.

It is carried out by the embassies of EU Member states, the aspiring countries and the European Commission.